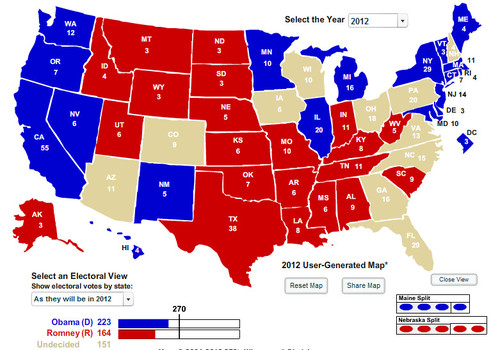 Some people like to complain about the Electoral College, “My state has been overwhelmingly [political party] for YEARZ, so my vote doesn’t count,” and believe that going to a national popular vote instead would make their votes count more.  There are pros and cons to that idea — mostly cons, in my opinion — but that’s an argument for another day.  Right now I’m just interested in how true that “we’ve been this way for years” assertion is.

I did some research using an excellent site called “270 to Win” to collect data on how states have historically voted, and I came up with these interesting tidbits:

On average, each state has voted the way it currently does for roughly 26 years.  If you proportion this out by each state’s number of electoral votes, however, that number becomes 24 years.  Or put another way, playing the averages it takes about 25 years for a state to cycle from one political party to the other.

Breaking things down just a little, in the 41 states (including D.C.) that are considered “Safely” or “Likely” to continue to vote the way they currently do, proportioned out by electoral votes, their streaks average out to 27 years.  That’s not really so different from the overall proportioned average of 24 years.  In the 10 “Leaning” or “Toss-up” states, however, you do see a clear difference:  Among those states the proportioned average is about 12 years.

Waiting between 3 to 7 elections for a shift in your state’s cycle doesn’t sound quite so interminable, does it?

Of course, playing the averages is not how things actually play out in real life.  There are some states that have been solidly one party or the other for quite a long time and don’t look like they’ll be changing anytime soon. 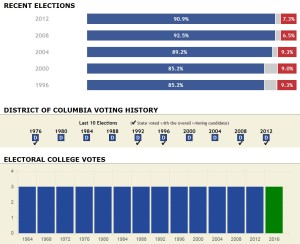 The farthest any particular “solid streak” goes back is 1964, the first Presidential election in which the 23rd Amendment that gave the District of Columbia electors took effect.  D.C. has NEVER voted Republican since it gained electors.  Those 3 votes are firmly Democrat, and unless a miracle occurs, they always will be.  (Think about it:  Practically everyone in D.C. is a government employee of some sort, and what are Republicans always claiming they want to do?  Shrink government!)

After that comes 1968, and I have to wonder just how badly LBJ and his policies were loathed such that 9 states — Alaska, Idaho, Kansas, Nebraska, North Dakota, Oklahoma, South Dakota, Utah, and Wyoming — turned solidly Republican for the next 48 years.  Was it Vietnam?  Affirmative action?  Medicare?  A combination of all three?  What’s even more amazing is that all of those states are considered “Safely Republican” for 2016.

After that, Minnesota went solid Democrat in 1976, and a small block of 4 states (Alabama, Mississippi, South Carolina, and Texas) turned solid Republican with Reagan’s first win in 1980.

But, oh, boy, the Reagan/Bush era was not politically kind to Republicans.  7 states in 1988 and 10 states in 1992 turned solid Democrat.

New Hampshire went Democrat in 2004, and then came the election of Barack Obama, which saw 7 states flip to Democrat.  Obama’s 2012 election saw Democrats lose only Indiana and North Carolina.  (Indiana must really not have liked Obama — they’re actually marked “Safely Republican” even though they only started voting that direction last election!)

So that’s pretty much how the states have gone.  Only other tidbit I notice is that of the states marked as either “Leaning” or “Toss-up” for 2016, most of those states’ streaks began in 2004 or later, with two exceptions:  Wisconsin and Pennsylvania — both Democrat stalwarts since 1988 and 1992, respectively.  Which just goes to show that even if you’re living in a state that’s voted consistently one way for the last 25 years, that doesn’t necessarily mean your vote doesn’t count.  Nobody should ever take their vote for granted, anyway — get out there and cast it!