Chris Pratt and Profaning the Sacred

At the 2018 MTV Movie & TV Awards, “Generation Award” recipient Chris Pratt delivered what is being hailed as a tour de force of subversive Christian preaching.  You can see it here.

In it Pratt lays down nine rules for the next generation.  He starts with a throwaway joke (“Breathe…if you don’t, you’ll suffocate”) but then gets deadly serious, laying out pearls of wisdom and even foundations of faith (“God is real”) culminating in a subtle come-to-Jesus appeal that has half the audience applauding and the other half wondering if they should anathematize him on Instagram.

In the middle of this stirring speech, however, was a particularly graphic rule about how to best drop a bomb in your host’s commode while at a party.  I’m not going to go into the gory details because the gory details are the problem.  In the middle of this stirring pronouncement of conservative and, yes, theological values, we get an explicit poop joke.

Now, I’m not going to complain about mixing humor and theology.  Pastors do it all the time to great effect.  Humor lightens the mood and makes hard lessons go down easy.  Humor can also relieve dramatic tension — that’s why some of the best horror movies contain a sprinkling of funny scenes.  There’s nothing wrong with dropping a few humorous notes into what is essentially a sermon — especially when you’re in the enemy territory of the entertainment industry.

When it’s scatological humor you’re marbling into your sermon, however, you’ve created a problem.  And the problem is this:  You’re now mixing the sacred (God) with the profane (poop), and all that ever accomplishes is to profane the sacred.

The concept of separating sacred things from profane things runs all throughout the Bible.  In the Old Testament, for example, God rescues the people of Israel from the profane kingdom of Egypt and makes them sacred to Himself.  Likewise, in the Ten Commandments six days of the week are designated for one’s profane work, while the Sabbath is sacred and reserved for rest and worship.  Whereas in the New Testament, Jesus famously speaks of not giving your sacred things to “dogs” and “swine” (meaning human beings whose conscience has been thoroughly profaned).

For example:  I wasn’t raised in the church, so after my conversion in my mid-twenties, a church service was new territory for me.  I didn’t know when to sit, when to stand, when (or if ever) to kneel, and I especially didn’t know any of the music.  One song that made me strangely uncomfortable was Paul Baloche’s “Open the Eyes of My Heart“.  In the middle of the song we’re taken to this refrain:

I want to see you

For some reason, I was extremely uncomfortable singing the word “holy” and I couldn’t figure out why until it hit me:  I’d only ever used the word “holy” in conjunction with expletives.  “Holy crap!”  “Holy shit!”  “Holy fuck!”  And now here I was trying to sing about “Holy God!”  I didn’t feel like I was doing God any favors calling him holy.  I felt instead that I was profaning God, because profanity was the only context for that word I’d ever known.  It took a lot of mental scrubbing to make that word clean in my mind.

Getting back to Chris Pratt’s speech, what context do you think people will associate with his soaring words about God and grace?  Well, the headlines tell you: 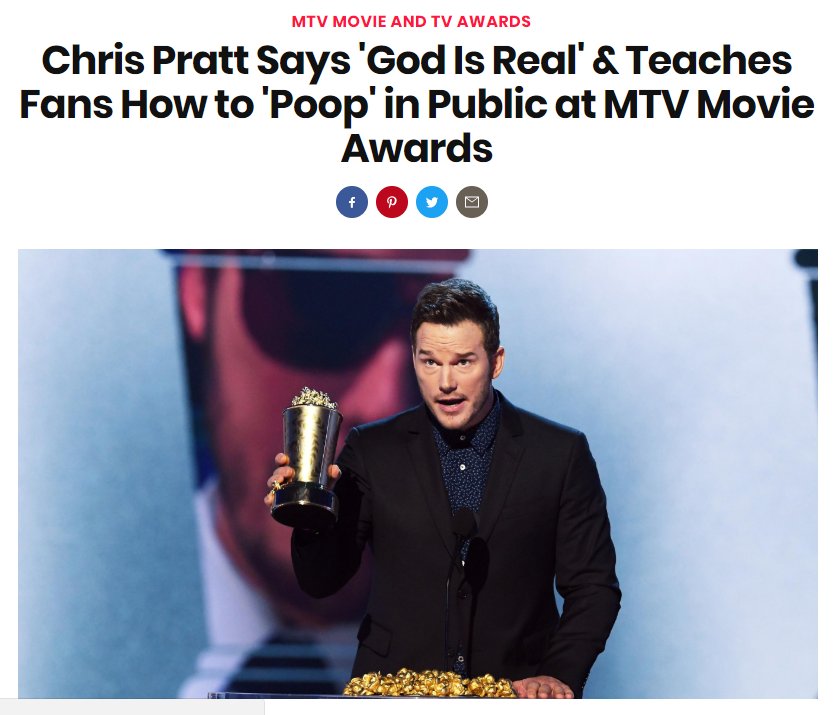 If you eliminate the words not in quotes, you get “God Is Real Poop”

I submit to you that this is a problem.  Yes, I know that Pratt is reportedly a very devout Christian — he would have to be to make such a speech in that setting — and the lion’s share of his speech was dedicated to very good points about how to live a healthy life — even a godly life.  But he went right into the toilet for some of his material, and now you can’t really separate the aroma of incense from the stench of poo water.  It’s not a good mix.  As a comedian once said, “Why do people spray their apartments with lemon scent?  They end up smelling like lemon and ass.”

There are some people who think it takes mixing the sacred and the profane like this to make God “accessible” to younger crowds who, thanks to the Internet on their phones, have been immersed in more filth by the time they’re twelve years old than grown men like me have ever brushed up against online or off.  A clean and holy God probably seems too far out of reach to them — ya gotta dirty God up a little, bring Him closer in.  But all that does is remake God in this fallen world’s image, into a false idol.  I’m not saying this was necessarily Pratt’s intent when he constructed his scat-o’-Nine-Rules, but that was the effect, and it’s a harmful and misleading effect.  Our God is not a God of frivolous poop jokes.  Our God is holy.

So, while I applaud Chris Pratt for bringing some knowledge of God to the masses in what I hope will not be a career-stunting move, when it comes to the poo, I boo.  Surely there were other less execrable subjects suitable for that well-placed throwaway joke, and he surely should’ve used one.  Then we could all talk about how God was elevated by his speech without having to deal with the fact that the pedestal he placed God on was, in fact, a commode.