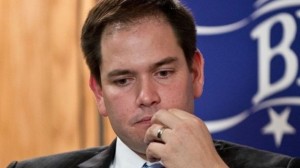 I was reading this article from RealClear Politics about Marco Rubio’s depression over the current state of the GOP.  While I don’t necessarily agree with everything he says, his tone is sobering, and his conclusion is hard to argue against:  “The Republican Party and the conservative movement” are very much in danger of being “shattered and fractured.”  His assessment, “This is a frightening, grotesque, and disturbing development in American politics,” is spot-on, not merely because the GOP is self-immolating, but also because once its self-made funeral pyre has cooled, there will be nothing left to stand in the way of the progressive agenda desire to remake American government into something new — something America’s Founding Fathers neither envisioned nor desired.  Even the ramming of Obamacare through a fully Democratic-controlled Congress was only a foretaste of what’s to come if America is left with only one viable political party.

Because the possibility of a complete progressive takeover of American government is realistically looming ahead, it behooves us to ask, “What exactly do progressives want?”  Ask a progressive that question, and you’ll probably get this answer:  “Evolution.  We want to see society evolve.”

But going all the way back to FDR, “evolution” has really meant something else:  Call it “dependency”.  Call it “absorption”.  Call it “assimilation”.  Every major progressive program, then and now, has taken the form of attaching people more strongly to government.  FDR started it with Social Security.  LBJ expanded it with Medicare, Medicaid, and the other “Great Society” welfare programs.  Obamacare has been the latest progressive victory, but that threatens to be dwarfed by the single-payer “Medicare for All” health care program Bernie Sanders is proposing.  And then there’s Bernie’s promise of “free” tuition at public colleges on top of the already-“free” public school system that has long been the subject of widespread complaints.  There is not a single progressive program that is not aimed at making Americans more dependent on government for their needs.  And what we have to understand is, this is by design.

Everyone is driven by a need to belong to something larger than themselves.  For many people, religion fills that void.  Others devote themselves to their families and circles of friends.  Others find their purpose in their careers, serving small businesses and corporations.  Human beings have always wanted to feel part of a larger whole, but before now, we were allowed to choose what entity would have our allegiance and give us our sense of purpose.  No longer.  As the Democrats famously declared in a video at their 2012 National Convention, “Government’s the only thing we all belong to.”  Churches, clubs, etc. — these may all have their value, but at the top of the hierarchy is government, and government is the primary entity to whom we all owe our fealty.  Everything else is a subgroup — an organ in the body which is government — and those organs should be looked upon as healthy or cancerous depending upon how they contribute to government overall. 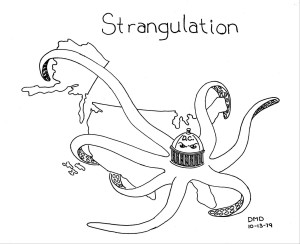 It’s crucial to understand that last point:  To progressives, government is not merely a tool human beings use to keep the peace and improve their lives.  Government is a superorganism to which human beings belong organically.  Consequently, you are only a properly-functioning human being if you are contributing to the well-being of the government superorganism.  Fail to contribute as you should, and you are a malignant cell in the body that must be rehabilitated or cut out.

The easiest area in which to see this progressive attitude demonstrated is in the realm of taxing the rich.  If you’re a rich person in America, then you aren’t “paying your fair share” — i.e., you’re not functioning properly as a cell in the body that is government.  Don’t you realize what a malignant, cancerous thing you one-percenters are (even though you pay nearly 50% of all federal income taxes just by yourselves)?  We need to apply the “gene therapy” of even greater taxation to bring those one-percenters’ cell reproduction rates down a peg!

A more subtle and chilling area in which to see this attitude is in the realm of abortion.  If you’re an unwanted unborn child in America, you have no value to the superorganism that is government.  When human beings have no value except that which is relative to government, it’s impossible to look at unplanned human beings coming into the world as anything other than a waste of resources that government can’t afford.

And that’s the real danger in the progressive view of the relationship between human beings and government:  The devaluation of the individual and the elevation of government over all.  Progressives call this “evolution” as if the pinnacle of evolution is a well-functioning government superorganism, and any “malignant” individuals and subgroups must be “chemotherapied” either into “remission” (i.e., submission) or just plain out of existence.

Conservatives, for all their warts, reject this vision of government as superorganism.  To a conservative, human beings belong fundamentally to themselves, not to government.  Government is not an organic good but a necessary evil that requires copious restraints and limits so that it never crowds out the individual in its lust for ever more power.  As the rise of Nazism and Communism demonstrated, governments that gain too much control over the individual are capable of astounding evil.  As evidenced by China’s brutal “one-child policy” (which graciously became a “two-child policy” this year — millions of dead wanted babies later), they still are.  It is the conservative objective to see that government never expands to such overarching levels.

So what happens if the GOP, which has been the only viable vessel of conservative values in American government for the last 50 years, self-destructs in a paroxysm of rage and hands the government over to complete domination by the progressive agenda for the next hundred years?