Don’t Put Gorsuch Out in the Cold 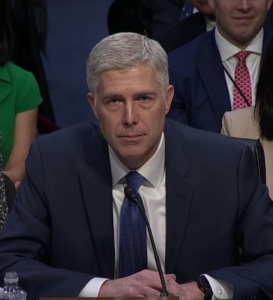 If you’ve read anything about Supreme Court nominee Neil Gorsuch‘s dissent in the case of the truck driver who left his trailer behind rather than freeze to death [PDF link], and you’re wondering, “How could Gorsuch be such a cold, heartless bastard as to want to side with the truck company that fired the driver for leaving his trailer behind?” you don’t have the slightest clue what the case was about.

This case was about what the term “refusal to operate” means, and that’s it.

The facts: A truck driver’s trailer had frozen brakes. His rig was driveable, but the heat was out. He called in and said, “I can’t drive my truck with the trailer attached, my heater doesn’t work, and it’s freezing out here. What do I do?” The supervisor said, “Use the heater.” The driver said, “I can’t. What do you want me to do?” The supervisor said, “Stay with the trailer until the repair truck gets there.” When the repair truck was late, and it was too cold to stay, the driver unhooked the trailer and drove away in his rig. The driver was then fired, and the driver sued on the basis that he couldn’t be fired because the law says that if there’s a safety concern, you can’t be fired for “refusal to operate your vehicle”.

The majority said that “refusal to operate” was an ambiguous term, so it deferred to the Department of Labor’s judgment per “Chevron deference,” which says that if a term is ambiguous, then it means whatever the agency that enforces that area of law wants it to mean.

Gorsuch said no, “operate” means “operate”. If you drive away in your rig, you’re “operating” your rig. You can’t “refuse to operate” something by operating it. In fact, the driver was specifically ordered *not* to operate the rig (i.e., he was ordered to stay in place), and he instead operated it, which would seem to be the exact opposite of a “refusal to operate” — a “refusal to not operate” would have perhaps been more appropriate.

As I hope you can see by now, this was not a case where compassion for the driver’s plight has the slightest bit of relevance. This is a question of what words mean, and nothing else. If you disagree that “refusal to operate” means a complete and total refusal to operate the vehicle in any way, shape, or form, that’s fine. If you instead think that “refusal to operate” means exactly that, that’s fine, too. But don’t condemn Gorsuch for “lacking compassion” because he thinks the latter. There’s no place for “compassion” in a decision about what words mean, and it’s ridiculous to think there is. You might as well argue that because little Bessie wants to win the spelling bee so badly, we should change a word’s spelling to fit her garbled answer. That’s not how spelling bees work, and that’s not how the law works, either.

Words have meaning, and Gorsuch disagreed with the majority over the meaning of particular words. Calling him “heartless” for that is brainless.