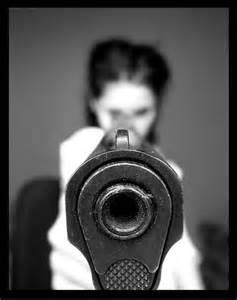 ME: “That’s because when the time comes to defend freedom, you need guns a hell of a lot more than pit bulls. Or kids.”

HIM: “You wouldn’t know freedom if it slapped you in the face. If you think you need a gun to live, you’re not free, dude.”

ME: “Your freedom depends on the hope that you can call 911 and people with guns will come running. Guns = freedom.”

HIM: “I am not afraid of life. I can take care of myself. I don’t walk around afraid of everything that moves.”

ME: “No, just guns and the thought of other people owning guns, it seems. Maybe if you owned a gun you’d be less afraid.”

HIM: “I’m not afraid of anything or anyone. That is you who are afraid. We used to call you guys pussies, maybe it’s different now.”

ME: “We’re called ‘armed’ now. Guns do have a way of changing things. That’s why the Founding Fathers passed the 2nd Amendment.”

HIM: “That’s not what it says. I like pussies better. Seems more fitting. Maybe armed pussies.”

ME: “The funniest thing about people who belittle those who own guns is knowing who wins if it ever comes down to it.”

HIM: “Therein lies the problem. Guns upset the natural order. Now any two-bit punk can act like a badass. Used to be punks like you knew your place.”

ME: “Therein lies the fear! A four-bit punk can no longer be assured of victory over a two-bit punk. Thanks, 2nd Amendment!”

HIM: “You’re the pussy that needs the gun. Put down the gun and we can talk.”

ME: “Translation: ‘I can’t overpower you if you’re armed!’ Kinda proves my point about why guns are a good thing.”