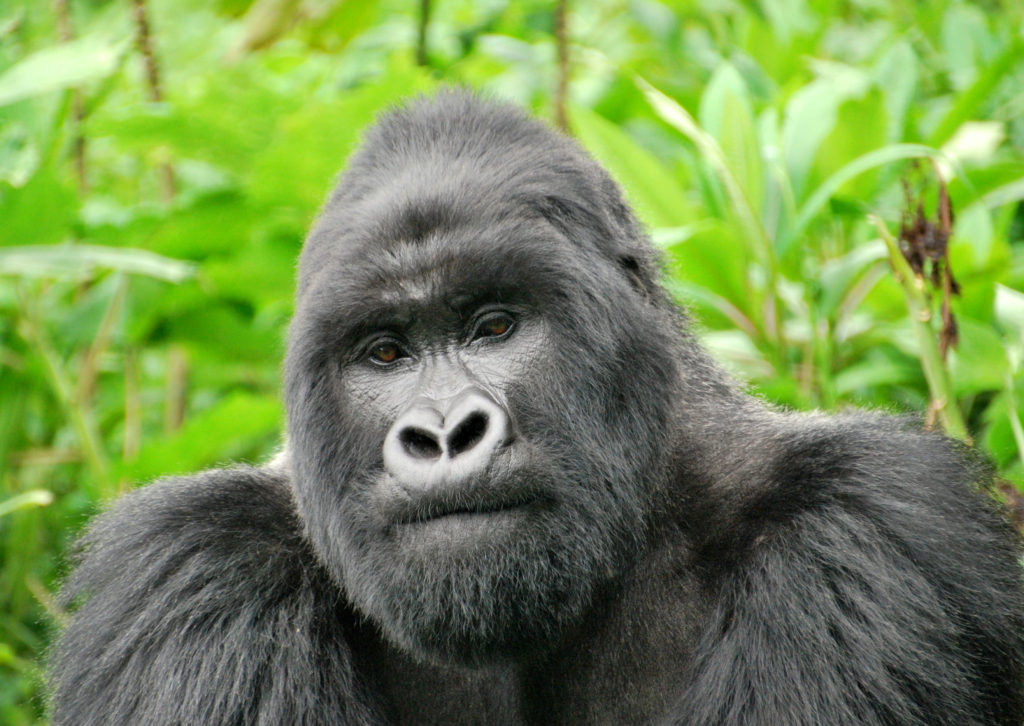 You must have seen the story at some point during the last week. A three-year-old boy visiting the Cincinnati Zoo with his parents fell into the habitat of a silverback gorilla named Harambe, and zoo officials had to shoot the gorilla before he could hurt or kill the boy.

Of course, this was an outrage to the animal-worshipping segment of our world who were outraged that a rare and majestic silverback gorilla should be sacrificed for something so trivial and commonplace as a human child. But that’s to be expected.

What I didn’t expect was for one of my friends, who’s markedly liberal in many of her views, to come out in favor of shooting the gorilla before it could harm the child. And let me tell you, when one of your friends with whom you constantly disagree shows a glimmer of sanity, it’s a very heartwarming experience.

But there was a catch. When one of her friends replied, “I value animal over human lives 99% of the time. I definitely value this gorilla’s life more,” my friend replied, “I was thinking the same thing until today. I came to this conclusion when I considered it being my child. The perspective has a dramatic switch.”

Okay, let’s set aside for a moment that valuing any animal’s life over a human being’s life doesn’t make sense even from an evolutionary point of view — i.e., any creature that prefers the members of some other species to members of its own is seriously miswired and primed for personal extinction.

What I want to focus on is the fact that my friend only switched her own perspective from “let the child die” to “save the child” when she posed to herself the hypothetical possibility that it was her own child. Then she felt sympathy for the child.

Now, I’m not really criticizing her for making a comparison between her child vs. someone else’s child. We make that kind of comparison every day. Few of us would see the image of a stranger’s child in need and react with the same emotional fervency and urgency as we would if we saw our own child in need. That’s simply the way we’re wired. We’re tribal: me and mine first, then yours.

What bothers me is that my friend had apparently made no attempt to put herself in the situation of the three-year-old child.

Or perhaps she did, but when she did, her moral calculations still came out in favor of saving the gorilla over the child.

It’s chilling because, on the one hand, my friend might be demonstrating an inability to empathize with a child. A child is simply too “other” for my friend to emotionally connect with, even though from a legal perspective she, being under 21, is still a “child” herself in some situations. It had to be her child whose plight she was considering before it could become a matter of real concern to her — which makes me wonder if even then the question wasn’t one of empathy but rather one of losing one’s valuable possession.

On the other hand, it’s chilling because if she did place herself in the position of the child — if she was able to hypothetically put herself in deadly danger at the hands of a massive gorilla — she still voted for the gorilla, and this willingness to die for some random animal, no matter how beautiful or majestic it might be, demonstrates an appalling lack of self-love on my friend’s part. She actually saw the animal as having more worth than herself.

In Luke 10:25-29, Jesus has a dialogue with a lawyer who wants to know what he must do to be found on the right side of eternity. (People back then understood, as thankfully many still do today, that this is something far more important than being found on the “right side of history”.) The conversation began:

And behold, a certain lawyer stood up and tested Jesus, saying, “Teacher, what shall I do to inherit eternal life?”

Jesus said to him, “What is written in the law? What is your reading of it?”

And Jesus said to him, “You have answered rightly. Do this, and you will live.”

But the lawyer, wanting to justify himself, said to Jesus, “And who is my neighbor?”

Note that the lawyer had no problem accepting Jesus’ proposition that to inherit eternal life, one must love God. It’s easy to tell ourselves we do that. Maybe we pray regularly, go to church regularly, give a portion of our income regularly. Or maybe we don’t do any of those things but still feel confident that our hearts are right with God. In any case, the lawyer saw no need to challenge Jesus on this point.

But on the latter point — “Love your neighbor as yourself” — the lawyer balked. Maybe he was remembering that there were certain individuals he hadn’t loved as himself. Maybe there were even certain classes of people that the lawyer found too distasteful or too inconvenient to put forward the effort needed to empathize with them and treat them as he would treat himself. So “to justify himself” — i.e., to make himself come out on the right side of Jesus’ instructions — the lawyer asked, “And who is my neighbor?” hoping that Jesus didn’t mean absolutely everybody. 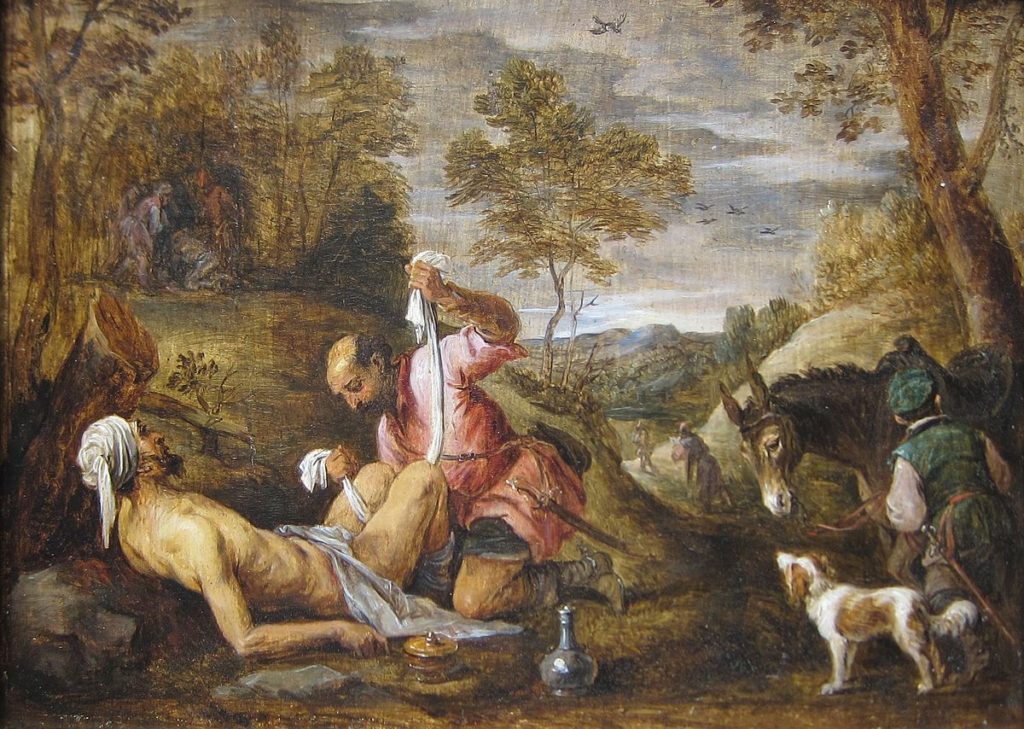 Jesus, of course, responded with the parable of the Good Samaritan. In the parable a traveler is robbed, beaten, and left for dead, and the first two people to come across him — a priest and a temple assistant — both decide to leave the man where he lies. Only a member of a despised “mongrel” class — a Samaritan — shows the man mercy: He bandages the man up, takes him to an inn, and even goes so far as to pay the innkeeper to look after the man in his absence.

After telling the parable, Jesus asks the lawyer, “So which of these three do you think was neighbor to him who fell among the thieves?” The lawyer replies, “He who showed mercy on him,” and Jesus finishes, “Go and do likewise.”

To be honest, for the longest time I had a hard time understanding this parable because it doesn’t seem like Jesus properly answered the lawyer’s question. After all, the lawyer had asked, “Who is my neighbor?” in the hopes of restricting the circle of people to whom he would have to show compassion. But in the end, Jesus turns the question around and asks, “This poor guy, who needed someone to show him compassion — who was his neighbor?” This didn’t make sense to me.

But (and this took years before it happened), it finally hit me: Being a neighbor is a reciprocal thing. Think about the people who live around you — your geographical neighbors. Can you say about any of them, “He/she is my neighbor, but I am not his/her neighbor?” or vice versa, “I am his/her neighbor, but he/she is not my neighbor?” No, of course not. Whoever lives next to you is your neighbor, and you are the neighbor of whoever lives next to you. That’s just how being neighbors works.

So, applying this back to my friend and the gorilla scenario, I have to ask myself, “Whom did she move in next to, and when?” Whose neighbor was she as she was sorting through her feelings about this helpless child at the mercy of this powerful gorilla?

Honestly, it seems to me that before she started thinking about it seriously, she felt more like the gorilla’s neighbor. She saw both a gorilla and a child in danger, and she moved in next to the gorilla. Who does that? Well, actually, lots of people, judging from the slime pouring out of social media like Twitter and Facebook. And that shows an appalling lack of neighborliness on the part of our society. A significant segment of the population has actually gotten to the point that they feel more kinship with animals than with their fellow human beings — gorillas are their neighbors; children aren’t.

But is this really any surprise? We are a nation that kills nearly a million unborn children a year. How do you think that happens, if not by withholding empathy from the unborn?

Think about it: When was the last time you heard someone argue that a fetus is nothing more than a parasite? Never mind the fact that this person himself or herself was probably cooing over and celebrating a sonogram picture of their or a loved one’s own parasite at some point in the past. They moved in then. They empathized then. They loved their unborn neighbor as themselves then. But a million times a year, they don’t. A million times a year, they just pass right on by and let a child lie in the street right where its mother and the band of life-thieves our society has the nerve to call “doctors” leave it bloody.

And here’s the thing this incident with Harambe the gorilla reveals about us that our abortion-soaked culture doesn’t want anyone to realize:

You can’t develop this lack of empathy needed to kill unborn children without also losing empathy for born children — or born adults — or even yourself. Because the truth is, every single one of us was at one time an unborn child. Which means our devaluing the life of an unborn child, even though that unborn child is not us, also necessarily devalues our lives, because we were unborn children once. We are all, each and every one of us, right now living lives of diminished value in the eyes of our society.

The irony is, if I asked my friend, “Do you think that, regardless of religion, ‘Love your neighbor as yourself’ is a good policy to live by?” she’d probably answer “Yes!” emphatically.

She’d never know she doesn’t do it.