As a longtime comics reader, I tend to watch anything comics-related that gets translated into movies or television.  Not everything, mind you — I do have some amount of taste.  I passed by “The League of Extraordinary Gentlemen (ad)” and both “Hellboy (ad)” movies, so it’s safe to say I don’t just chug whatever movies are put in front of me.  And I quit watching “Arrow (ad)” after two seasons and “Supergirl (ad)” after one episode, so I’m not OCD about my TV viewing, either.

For a while I was going to put FOX’s “Lucifer (ad)” in the skip category, but a favorite blogger of mine, Matt Walsh, expressed so much outrage over the fact that FOX was putting out a TV series with the devil as its protagonist, that I figured I needed to save Mr. Walsh the aneurism he’d surely develop just watching the show, and write up a review so he wouldn’t have to go anywhere near it.

I ought to make that my new tagline:  “I watch crap so Matt Walsh doesn’t have to.”  But there’s probably a lawsuit in there somewhere.  Best not to risk it.

Anyway…is “Lucifer” crap?  That’s what I’m about to find out.  I’m not quite liveblogging here — I recorded the pilot episode of “Lucifer” last night, and I’m going to watch it now, stopping to comment as I go.  So it’s delayed liveblogging.  (Tapedblogging?  I bet the internet has a word for it.  You go look it up.  I can’t do everything here.)

So the show opens with a brief “show concept” summary (brilliantly set to the song “Ain’t No Rest for the Wicked” by Cage the Elephant (ad)):  “In the beginning….The angel Lucifer was cast out of Heaven and condemned to rule Hell for all eternity.  Until he decided to take a vacation….”

That’s really the show concept in a nutshell.  Is it biblical?  Only slightly.  Yes, “the angel Lucifer was cast out of Heaven.”  But “condemned to rule Hell for all eternity”?  No.  That’s not biblical, that’s pop cultural.

According to Christianity (and I’m really not qualified to speak of other religious perspectives — maybe Jews or Muslims are totally down with the preamble of “Lucifer” as stated, I don’t know), there are two things wrong with the preamble.

First, Satan (which is how I’ll refer to the actual devil as opposed to the TV character) was condemned to suffer in Hell for all eternity, not rule.  There is no ruling in Hell, unless God is the one doing the ruling, and I’m not sure what ruling in Hell would look like anyway because Hell is nothing but nonstop conscious torment that never, ever ends.  I don’t really see what kind of “ruling” would be necessary for that.  The imagery of Hell presented in the Bible is that of a lake of fire — pretty simple, right?  Imagine a bunch of people bobbing up and down at the surface of an infinitely large lake of burning gasoline that they couldn’t climb out of if they wanted to because there’s no shoreline.  You don’t even need a lifeguard for that, much less a “ruler”. 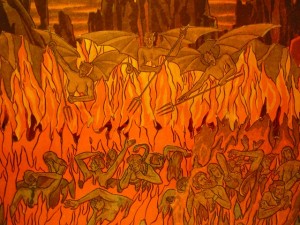 invented by the pop culture mavens of their peculiar eras, Dante Alighieri being the most well-known and influential.  The innovative karmic horrors of his “Inferno (ad)” have consumed the minds of countless artists after him, inspiring their pens and paintbrushes to wonderful heights (or depths) of sadistic glee, and basically screwing things up for anybody who’d like to approach biblical eschatology with a fresh set of eyes.  The demons, Satan included, aren’t going to be torturing anyone in Hell.  Rather, they’re going to be tortured in Hell themselves right along with everyone else there.

Second, neither Satan nor the demons are in Hell yet.  That condemnation to Hell isn’t going to take place until the end of history, when God says, “That’s it!” and basically writes a big “THE END” on the story of all of us.  That’s the point at which Satan and all the demons are going to get dumped into Hell and start their eternal sizzle right alongside all the recalcitrant humans, while in Heaven all the angels and humans in good standing start getting their eternal bliss on.

So if Satan and the demons aren’t in Hell now…where are they?

Right here on Earth, as a matter of fact.  Which ironically sort of validates the premise of “Lucifer” — the devil is walking the earth.  It’s just not any sort of special “vacation” like the show’s preamble says.  “Roaming throughout the earth, going back and forth on it,” has been Satan’s bag since the beginning of human history.  He was there to tempt Eve into sin (successfully), he was there to tempt Christ into sin (unsuccessfully), and he’s there to tempt us into sin (that’s up to you).  So according to the Bible, the premise of “Lucifer” has actually been the status quo for all of history:  An evil supernatural being is lurking around you right now, right here on Earth, ready at the first sign of weakness to tempt you into receiving the same condemnation he knows is eventually coming for him.

But I get the feeling FOX’s “Lucifer” is going to put a funny, sexy, not-so-serious spin on all that….