Ah, spring.  We didn’t really have a winter in Texas this year thanks to global warming — the poor sods on the East Coast apparently took all the snow that would’ve come our way — but even if you’re unable to get a clue from rising temperatures as usual, you can still tell the change of seasons from the overabundance of crap dumped into our theaters by what I can only assume are evil Hollywood bird migrations.  Think the swallows of San Juan Capistrano, only these are Hollywood pelicans, and their bills are stuffed with DVDs.  (Don’t bother telling me pelicans aren’t native to Hollywood.  These metaphors are custom-built and expensive — I can’t just dump them due to gross inaccuracy.)

The latest poor offering to hit theaters is the blockbuster “London Has Fallen“, the sequel to 2013’s passable-but-still-hard-to-fathom “Olympus Has Fallen (ad)“, the story of a Secret Service agent (Gerard Butler) who has to rescue the President (Aaron Eckhart) when the White House is captured by terrorists.  I’m tempted to explain the movie in more detail than that, but there’s just no point.  The only real strength “Olympus” had was being loads superior to its sister offering “White House Down (ad)“, which from the outset was so chock-full of liberal B.S. spewing from the mouth of President Jamie Foxx (e.g., “If we can just give them jobs, they won’t be terrorists anymore“) that I couldn’t even watch it.  (James Woods was the villain in that one, and given how conservative he is, I think he might have been playing himself.)  Here’s the link (ad) if you want to play a rousing game of, “Which Sack of Crap Smells Worse?”

Anyway, “Olympus” offers up one completely implausible scenario after another — (no, we’re not going to pull our troops out of South Korea to save the life of the President, that’s why we have presidential succession) — but there is one particular scenario that sounds plausible on the surface, and it has to do with the love of a father for his son. 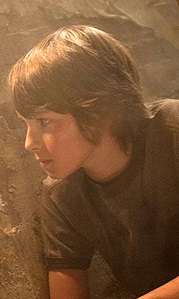 n “Olympus”, the President’s son Connor (Finley Jacobsen) is hiding somewhere in the terrorist-infested White House, and it’s a race between Gerard Butler and the terrorists to see who can find the boy first.  If the terrorists capture him, it’s all over, because they’ll use him as leverage to make the President spill the nuclear launch codes.  As House Speaker Trumbull (Morgan Freeman) puts it, “The President will hold out as long as he can. But if they get his son…if they hurt him…well…nobody could hold out under those circumstances.”  It sounds sweet, doesn’t it?  It sounds…right, somehow.  You might be willing to suffer torture yourself, or even give up your own life, to keep your enemies from getting what they want.  But if your child’s safety or life is on the line, you’ll just fold like a house of cards, won’t you?  You’ll do anything to keep him or her in one piece.

Yet, as it so happens, this is simply one more implausible scenario — at least where Christians are concerned.  We know this because a scenario exactly like it played out in the Middle East, where ISIS is killing Christians wherever they find them.

From an October 1, 2015 story by Christian Aid Mission:

At several steps on their path to death by beheading and crucifixion last month, 11 indigenous Christian workers near Aleppo, Syria had the option to leave the area and live.  The 12-year-old son of a ministry team leader also could have spared his life by denying Christ….ISIS militants on Aug. 7 captured the Christian workers in a village whose name is withheld for security reasons.  On Aug. 28, the militants asked if they had renounced Islam for Christianity.  When the Christians said that they had, the rebels asked if they wanted to return to Islam.  The Christians said they would never renounce Christ.  The 41-year-old team leader, his young son and two ministry members in their 20s were questioned at one village site where ISIS militants had summoned a crowd….His son was two months away from his 13th birthday.  In front of the team leader and relatives in the crowd, the Islamic extremists cut off the fingertips of the boy and severely beat him, telling his father they would stop the torture only if he, the father, returned to Islam.  When the team leader refused, relatives said, the ISIS militants also tortured and beat him and the two other ministry workers.  The three men and the boy then met their deaths in crucifixion.

“Nobody could hold out under those circumstances”?  Nobody, Mr. Speaker?

Nobody ever met these Christians.

In the book of Matthew, Jesus sends His disciples out to evangelize the people of Israel.  He knows their message will not be welcomed by all.  And he tells them the fate that awaits some of them, and what to say and do in response to it:

“Be on your guard; you will be handed over to the local councils and be flogged in the synagogues.  On my account you will be brought before governors and kings as witnesses to them and to the Gentiles….Brother will betray brother to death, and a father his child; children will rebel against their parents and have them put to death.  You will be hated by everyone because of me, but the one who stands firm to the end will be saved….Do not be afraid of those who kill the body but cannot kill the soul.  Rather, be afraid of the One who can destroy both soul and body in hell….Whoever acknowledges me before others, I will also acknowledge before my Father in heaven.  But whoever disowns me before others, I will disown before my Father in heaven….Anyone who loves their father or mother more than me is not worthy of me; anyone who loves their son or daughter more than me is not worthy of me.  Whoever does not take up their cross and follow me is not worthy of me.  Whoever finds their life will lose it, and whoever loses their life for my sake will find it.”  (Matthew 10:17-18,21-22,28,32-33,37-39)

What Jesus says to these original Christian evangelists in the book of Matthew, He still says to Christians today.  The powers who reign today will beat you.  Your own relatives may hand you over to be killed.  But you must not falter.  Ultimately, the worst any human power can do is kill you for your steadfast allegiance to Christ.  But if you betray Christ, God can and will do even worse to you.  So don’t let anyone, not even your own children, stand between you and Christ.  If that means you have to be crucified, you hold your ground.  Even if it means your own child will be crucified, you hold your ground.  Because your eternal destiny depends on it.

That poor, doomed 12-year-old boy knew this.  So did his father.  Which is why they’re in heaven today, glorifying Christ with the new life they found according to His promise.  They stood with Christ to the end of their lives, and so they are standing with Him now and forever in glory.

They stand because for them — and in them — Olympus didn’t fall.