I learned something interesting today about the power of unintended consequences:  While gay marriage proponents are obviously trumpeting the Obergefell v. Hodges decision as an unequivocal win, the ramifications of the Supreme Court’s decision might actually put some gay — and straight — couples in a bind when it comes to employer health benefits.

You see, prior to Obergefell, gay couples usually had the option of registering their relationship as a civil union or domestic partnership or whatever that particular state’s marriage-substitute was called.  And insurance companies used by employers would generally recognize those legal relationships and offer benefits to them as if they were, in fact, marriages.  After all, it wasn’t like gays had the option to get married, right?

But now they do.  And that’s got some insurance companies wondering why they should bother covering the marriage-substitute relationships now that marriage is open to gay and straight couples alike.  So some aren’t.

That puts some gay couples in an interesting bind:  either get married “for realz”, or someone’s losing their health insurance.  Which, of course, is an issue that most unmarried-but-sorta-hitched gay couples will readily solve by actually getting married.  But, this being a world full of diverse individuals, I have to believe that there are some gay couples who were perfectly fine with their civil unions, domestic partnerships, or whatever, and really weren’t interested in forking over yet another legal fee to the state just to make sure a hospital won’t bankrupt them.  I assume some gay couples simply don’t have that money to burn.  And I would guess that there are other gay couples who would’ve liked some time to make arrangements with friends and family so that they could have the wedding they’ve always wanted, only to have to move up their timetables significantly.  The number of gay couples actually in such a situation is probably small, but it’s there, and you gotta feel for them.

But not just them, of course.  There are also more straight unmarried-but-cohabiting couples than ever before, and insurance companies have just told them to crap or get off the pot, too.

So what does this all mean for society?

What I find most interesting about these developments is seeing how social and economic pressures cause government, businesses, and people in general to warp in different ways.  First, government wage controls caused businesses to offer health benefits to employees, including family coverage.  As homosexuality became more socially acceptable and marriage rates began to decline among straight couples, society expanded its notion of “family” and created marriage-substitutes for those who couldn’t (or saw no need to) marry.  Then economics got in the game as businesses extended the benefits previously reserved for marriage to these substitute institutions.  And with each of these pushes outward, a previously small balloon of possibilities inflated, and inflated, and with one supreme 5-4 lungful, inflated to hot-air-balloon-festival dimensions with the advent of judicially-mandated gay marriage.

But now it appears that with this last inflation has come a deflation.  Now that all possibilities are open to everyone…all possibilities aren’t necessary anymore.  Gay marriage is here, thus ending the biggest reason to have civil unions or domestic partnerships or any institution besides plain-and-simple marriage.  Government has pushed us as hard as it can in the one direction, and now, for starters, economics is pushing us back in the other direction — pushing us to simplify what our desires once made complex.  Narrowing our options.  Commanding us, “Marry…or else.”

Is this a good thing or a bad thing?  Depends on both your perspective and the circumstances.  For a social conservative it’s a confusing blend:  encouraging straight couples to marry = good; encouraging gay couples to marry = bad.  But what’s especially disturbing to someone who’s conservative in a general sense is how the unintended consequences of government decisions ripple out into economics, which in turn ripples out into societal change.  As much as the secular complain about the influence that religion has on society, look at the influence that government has on society, and consider how unthinkingly it spends that influence.  Consider this, too:  If you’re a secular who finds appalling the notion that God should tell you what to do, how can the notion of government telling you what to do be any more palatable?  You only have to turn on any news channel to see the horrible things governments can do.  This is why conservatives look to shrink the size and role of government in our lives wherever possible.  The Founding Fathers of America envisioned a federal government of limited powers, so 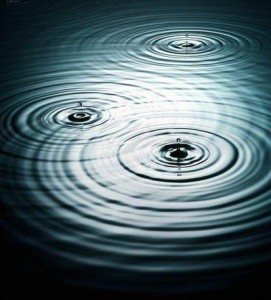 that people would be free within their own personal and social spheres to pursue happiness as they saw fit, being as free as possible from the ripple effects of unthinking government policy.

Yesterday, the ripples expanded out to the edges of our social pond with the establishment of gay marriage.  Today the reflected ripples are headed back toward the center in a shrinking of health insurance options for cohabiting couples.  Tomorrow we’ll have to deal with still more interference patterns as government throws more stones in our social pond.  And we conservatives will do what we must to keep the stones as few and as pebble-sized as possible.  Because that’s what drives conservatives:  keeping government from making a splash.