In this most recent election, no third-party candidate was going to win. That much was plain. (The chance that Evan McMullin could’ve been handed the presidency by the House of Representatives in the case of an Electoral College tie was slim beyond words, and you could only possibly effect that outcome if you were a Utah voter anyway.) So a third-party vote was clearly a throwaway vote this year — i.e., you may as well not have voted at all.
That does not mean, however, that those votes were unimportant. Three states — Wisconsin, Michigan, and Florida — were so closely decided for Trump that had only Jill Stein’s votes gone to Hillary, Trump’s win would’ve been a much narrower 280-258 rather than 306-232. And in Pennsylvania, had all of Jill Stein’s votes and just under *20,000* of Gary Johnson’s votes (of the over 140,000 votes he received) gone to Hillary, we’d be looking at a 278-260 Clinton victory.
Now, you may not live in any of those four swing states, but if you cast a third-party vote for Johnson or Stein or some other candidate or just plain stayed home and didn’t vote at all, you’re philosophically in the same boat with the third-party voters and non-voters in those swing states, and that means you have to realize something: 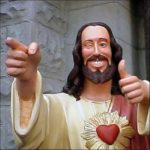 You elected Donald Trump. I hope you’re happy with your decision!